So, for a couple months I’ve been meaning to start a book club with my friend, TWagus, and we’ve had several books we’ve considered starting with, having a weird range that goes from Kurt Vonnegut’s Cat’s Cradle, to Robert Ludlum’s Bourne Identity. Similar, right? Emily’s friend, Sarah, wanted in, and naturally, I had to force Emily into jumping on the bandwagon. Then, as I was getting my haircut, my barber told me how he used to go to a dinner club and a film club. He liked being able to see a flick and, as he put it, “get smashed and talk sh**, ya know?” (Ivan is clearly gay, and he does a mean haircut.) And lo, came the idea to do all three in one cluuuuuub!

Em and I go out to eat a few times a month, and watch a ton of movies, so this is a very actionable plan. Sarah is known for her self-proclaimed love of bad movies. When I pitched the idea to TWagus, he said we were trying too hard. Fair ’nuff.

And today, I had the convenient inconvenience of being away from the house around lunch time, and near DeLong’s DeLuxe. Em makes fun of me for thinking it’s an oil change shop, but that boxy shape and blue-collar typeface though. Look at this crappy pic and you’ll be on my side. 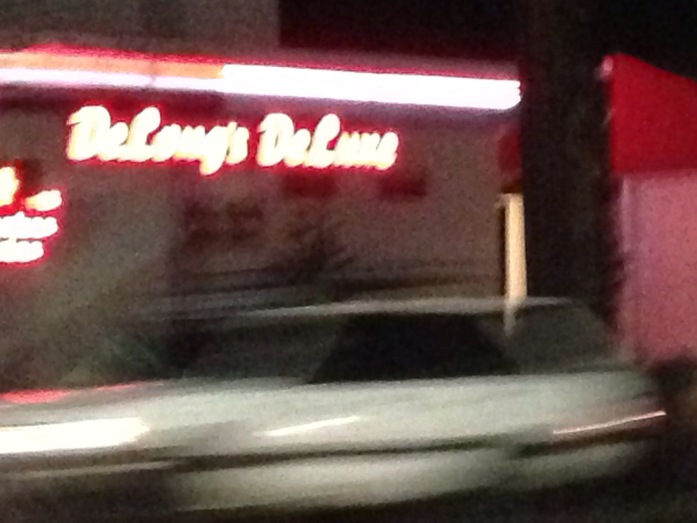 Immediately upon disembarking from my whip, I got the most trusted endorsement that businesses kill for: a word-of-mouth referral from a friend. A friend from a company I was attached to was in the parking lot, and had just grabbed his burgers. I asked him if the food is good, and he answered in the affirmative. He said he goes there all the time (tasty enough for repeat business), but their service is a little slow, so order early. Duly noted.

Since we’re low-carbing, this review will be incomplete. The food-service artisan helpfully offered to put the innards of our burgers on a “bed of lettuce.” Sounds fancy, doesn’t it? Five minutes later, I had a bleu cheese, motz, and bacon burger and Em had the original (way to screw the pooch, Emadumb). There are only a handful of basic burger variations to choose from. Lots of shakes and sides. But we didn’t get any of those. Just hamburgers.

Mine was great. To start out, the obvious crux of a burger is the cow. It was medium-rare, and had a punchy, beef savoriness. There’s lots of places, even dives or mom & pop shops whose patty melts in your mouth in a bad way. This didn’t. It was distinct from the lettuce bed that it lounged upon. The bacon, too hot to be under the mozzarella bedsheet, was thick and unlike the chintzy pork you find elsewhere. Looked like what you’d cook at home, and nothing like it’d seen a microwave.

The bleu cheese was pungent, and pulled the flavor from the ground beef onto my taste buds. It contrasted in a nice way and could have been pedestrian. It could have had no flavor at all, like a weak Wendy’s burger.

Something I didn’t expect and found pleasantly unique was the dolop of cream cheese in the corner of the burger box. I wish I could say it was intentional, but couldn’t because of its real estate. I wish it had been spread on the meal. But, reconsidering, I admit that this judgement isn’t completely fair because—again—my food was sans bun. It’s possible that they would have normally spread the schmear on the bread. But the fact is, cream cheese on a hamburger is nice. It gave it a nice—what’s the opposite of flare?—evenness.

I think I chose well in assuming their most complex burger would showcase their aptitude. The bleu cheese bacon burger is not unique, but they did it right. The clerk seemed to be happy to be there, and that says a lot about an establishment. I would bet that a handful of employees work there, and that they’re more like family than peers, like the bistro I worked at.

I approve of the work they do here, and recommend it. Unfortunately, half of my squad wasn’t present, so I can’t account for their critiques. Em thought it was “good.” (Again Em, give the dog a break.)

For what it’s intending to be, I give  DeLong’s Deluxe 4.5 spoons. With a more diverse menu, it would get the full five.

← How to be a BAMF boy: Boy Scouts of America
Gov’t vs criminals = gov’t vs all of us (eventually) #Apple →