Recap of the recent life

It’s been so long since I’ve posted, and I’ve tried so many times to restart momentum! I’m so sorry, guys. Much wack! Very fail! Just a few days ago, someone even called me out on it in a comment (honestly, thanks LeilaJuicy). Most def, the hardest part about creating content is publishing consistently. Kind of wish a blog was like an album where I could push a bunch of pieces out and then let the radio cycle them for a year and I could just write when I’m inspired—but then there’s being on tour and the analogy falls apart.

To be honest, about 98% of my creative energy has been directed at writing my epic fantasy. Usually when I’m struck with an interesting thought I’ll write about it here and try to get the rest of the world to pontificate about it. “Ya see?! Isn’t that weird we do that?” And more so I’ve been putting those ideas into world building. But it’s to a fault. I’ve tried doing a couple of YouTube videos, but either the bandwidth is too sketchy to get a solid framerate or I’m in uniform and can’t be representing with what I want to say. (Some of you already know what I do for a living, but I’m undecided if I want to sanitize that from my public footprint or not. We’ll see.) The effort has been there but sometimes the rants just weren’t powerful enough to overcome the hurdle. Which is f***ng stupid, I know.

I’ll try to catch you up with the previous (unplayed) episodes.

I forgot I posted a couple times in April about the state of the nation and environmentalism, but since then I’ve got a banjo and started plucking away at it. I posted in my Insta a little finger roll I learned (which is surprisingly helpful to learn other more complicated stuff). This is bigger than “look at the new toy I got!” It’s big for me because I never felt capable of learning an instrument. As a teen I had an electric guitar and toyed with the idea of being in a band with my friends but they actually played theirs and, I didn’t. And there’s something about the soul when you learn like this. Making music is a tactile and mental skill, and I can feel my brain working in ways I’ve never felt before. Lots of seratonin! And it’s a struggle too, but that’s party of the beauty. From my college classes in education, I know that the moments when you exert that extra percentage of effort when your frustrated is when you learn the most, and that’s when the most rewarding feeling is too! It’s really cool to feel these theories things within yourself and not just observe them in youth.

Why the banjo you ask? It has such an honest and unpretentious sound to it! It’s simple and also a bizzare instrument: like a guitar on a snare drum. Been wanting to experiment with one for few years. Finally did it because I’ve been playing Far Cry 5 and the backwoodsy theme caught up in me. Actually, first I started playing the harmonica since my Kentucky-raised dad played it for my family growing up. I loved hearing it at bedtime, those gospel songs on that warm mechanical vibrato. I was always worried his mustache whiskers would get pulled out. The first song I learned, a few weeks ago, was “Amazing Grace.” Felt fitting. I’m not too much of a Christian anymore, but it’s still my culture, and just about anybody feels comfort or at least respect when they hear that song. Plus, it’s so ‘Murican! I go to the field quite a bit for work, and it’s a very portable instrument. I figure it’ll raise the morale of not just myself but the people I work with, after a long workday. In the middle of nowhere, there’s not much for music anyhow. When I get a hard case I’ll bring my banjo out too.

In other matters, I also took a break from blogging because I was working at SuperInterns.com ten hours a week. Not much, but it was on top of the forty or fifty I work normally. That was a great experience. I learned a ton about the writing industry. Also made a metric boat-load of friends. Went adventuring in Portland with one Mick Howard. However, it was grueling so I didn’t have time to do much else. I did well enough that I was promoted to senior content writer though! That was fun. Got some management experience. I finished that up about in May, and I’ve just been derping since. Really enjoying my evenings again!

I’m also slated for a career change. Still with the same company but in the writing department instead. I’m mad stoked! Finally, I’ll get to use my degree! I go to training for it next May. And that’s like the best news I’ve had in years! I wish I could be more specific than that, but unfortunately I can’t for the same reason as my uniform. I’m like > < that close just saying what I do.

Bottom line is there’s hope. The future hasn’t looked bright for me in a long time, and it finally does. I’m moving forward in my skill set and my career. I’m also learning. And it’s currently summer. So. There’s that.

Oh, and I got finally got a writing tattoo. 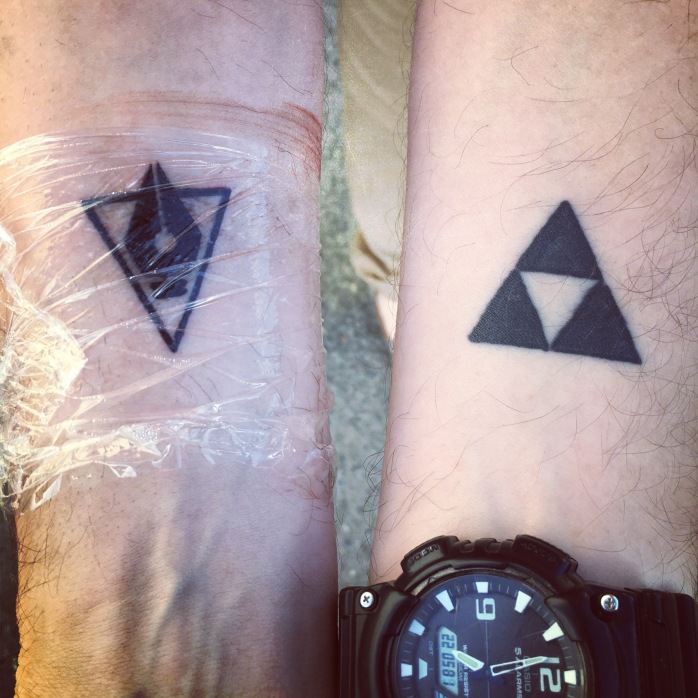 ← Education, the 2nd Amendment, and Starbucks
Medieval Reading and Writing →